Skip to content
VISAKHAPATNAM: Andhra Pradesh Chief Minister Y S Jagan Mohan Reddy on Thursday announced an ex- gratia payment of Rs one crore each to the kin of those killed in the styrene gas leak incident at LG Polymers Limited near here. The NDRF had put the death toll from the leak at 11.

The chief minister announced a committee to probe into the mishap and also said the government would talk to the LG Polymers management seeking job for the kin of the deceased in any of its businesses.

Speaking to reporters after conducting a review meeting, Reddy also announced Rs 10 lakh each to those undergoing treatment on ventilator support and Rs 25,000 to those who took treatment as out-patients after developing health complications due to inhalation of the styrene vapour.

Earlier, he held a review meeting at the Andhra Medical College with District Collector Vinay Chand and others.

Reddy further announced constitution of a high-level committee, headed by the Special Chief Secretary (Environment and Forests), to probe into the mishap and make recommendations to prevent such tragedies in the future.

Earlier, he visited the King George Hospital and consoled the victims of the gas leak.

Accompanied by his Deputy holding the health portfolio A K K Srinivas and Chief Secretary Nilam Sawhney, Reddy flew down to the port city and went straight to the KGH.

He met the gas leak victims undergoing treatment and enquired about their well-being.

At the review meeting, the Collector informed the Chief Minister that the gas spread was limited to a 1.5 to 2 km area from the epicentre of the leak and that the locals were evacuated to safety.

Of the two styrene tanks in the plant, the leak occurred from one that was holding about 1,800 kilo litres of the chemical.

How vulnerable are India's states to Covid-19 infections?

Thu May 7 , 2020
By Amit Kapoor & Sampriti Mukherjee The Covid-19 pandemic has upended people’s lives, leading to a massive death toll across the globe. Similar to other countries, India has also not been able to sidestep the wrath of the virus, Guest Contributor with total deaths going beyond 1,700 and confirmed cases […] 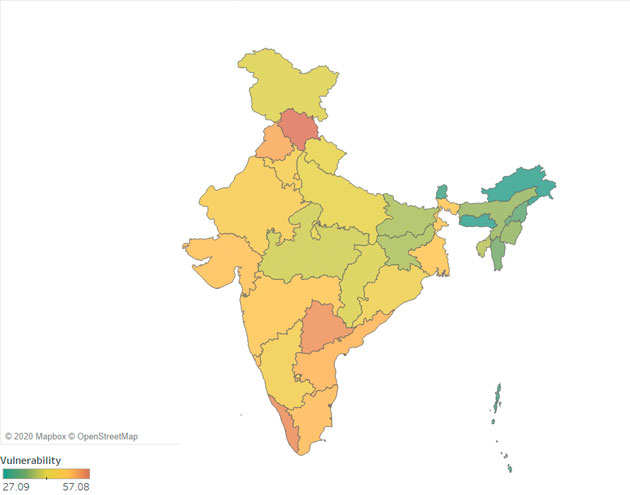